After a neuron fires an electrical impulse, this impulse needs to be chemically transmitted to another neuron to propagate into the neuronal circuit; otherwise communication would grind to a halt. In a paper published on May 10, 2012 in the journal Neuron, researchers at OIST identify a critical part of that chemical transmission.

To find out how the cell maintains this balance, Prof. Takahashi, researcher Kohgaku Eguchi, and their co-authors studied an auditory relay synapse visualized in a brain slice. They injected inhibitors into the presynaptic terminal in order to search for a protein that can accelerate endocytosis. The key turned out to be the protein cGMP-dependent protein kinase (PKG).

PKG doesn’t accomplish exo-endocytotic balance alone: it’s part of a complex chain of signals that links exocytosis with endocytosis. Upstream of PKG, the researchers found, the postsynaptic neuron produces the gas nitric oxide in response to the neurotransmitter glutamate. Nitric oxide flows back to the presynaptic neuron across the synaptic cleft and activates PKG in the presynaptic neuron (Figure 2). This new role for nitric oxide, already known to be an important signal molecule in the cardiovascular system, is the most significant finding in the new paper, says Prof. Takahashi. He adds that while the research was done on a specific synapse, the findings should hold true for other synapses as well. Taken together, the work answers a fundamental question about brain function, showing how neurons are able to keep vesicle endocytosis in sync with exocytosis and keep on signaling.

This research was partially funded by the Japan Science and Technology Agency (JST)’s CREST (Core Research for Evolutional Science & Technology) project, and was conducted by Dr. Kohgaku Eguchi and Professor Tomoyuki Takahashi and other members of the OIST Cellular and Molecular Synaptic Function Unit. Prof. Takahashi also serves as faculty of the Graduate School of Brain Science at Doshisha University. 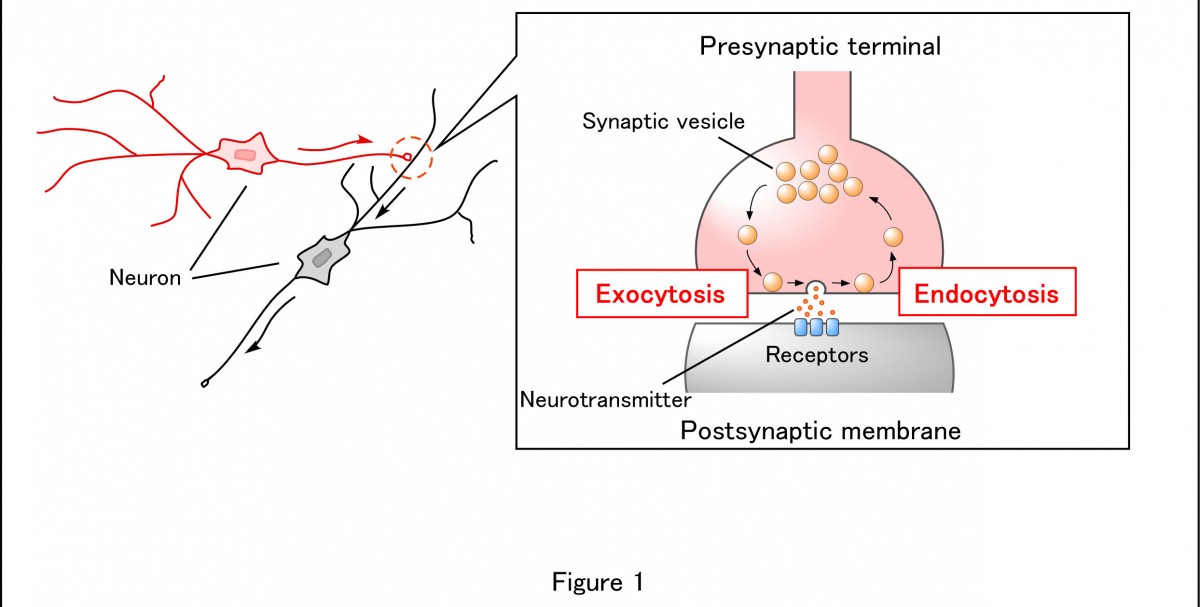 Neuronal information is usually passed anterogradely from presynaptic cells to postsynaptic cells, but there are retrograde signals conveyed from postsynaptic cells to presynaptic terminals. Nitric oxide (NO) is one such signal molecule, and as we demonstrated in this study, it regulates vesicle endocytosis in the presynaptic terminal. After the neurotransmitter glutamate is released from the presynaptic terminal, it binds to postsynaptic NMDA receptors and induces Ca2+ influx into the postsynaptic cell. The high calcium concentration activates calmodulin (CaM), thereby promoting NO synthesis by activating NO synthases (NOS). NO is diffused into presynaptic membranes and activates soluble guanylate cyclase (sGC), which synthesizes cyclic GMP (cGMP) from GTP. Increasing cGMP activates cGMP-dependent protein kinase (PKG), thereby accelerating vesicle endocytosis. The extent of this feedback regulation depends upon the amount of glutamate released. Thus, the NO-PKG retrograde pathway couples exo-endocytosis of synaptic vesicles for the maintenance of long-lasting synaptic transmission.

Figure 3 The calyx of Held synapses