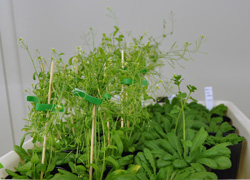 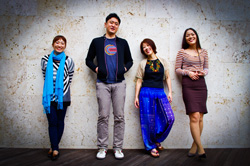 The members of the Plant Epigenetics Unit

In the popular understanding of biology, genes are indisputably in charge, dictating most aspects of how living things look and act. But it turns out that genetics is controlled by a higher power still: epigenetics, which determines whether a gene is active or not, and thus whether it can have any effect on an organism. Epigenetic changes are what differentiates a heart cell from a brain cell by turning some genes off and leaving others on. Sometimes, epigenetic changes can be a cause of human diseases and cancer progression. Through epigenetics, a person’s diet can even affect her granddaughter’s lifespan. Hidetoshi Saze and the Plant Epigenetics Unit he heads study how epigenetic changes come about, a question with wide-ranging implications for both plants and animals.

Epigenetics refers to a variety of chemical changes to DNA and its attached proteins that do not change the underlying genetic code, but can temporarily keep genes from being used by the cell. If genes were books in a library, epigenetic controls would be librarians who can either lock the books in a musty back room or allow them to circulate. Epigenetic changes help organisms adapt to their environments by using genetic information only when they need it. However, those modifications occasionally go awry, as, for example, when a cell attaches methyl molecules to a vast range of genes that are needed for normal growth and development, effectively locking them up. “I’d like to know why such spontaneous epigenetic changes occur,” says Prof. Saze.

To find out, the Plant Epigenetics Unit searches for mutants of the plant variety arabidopsis that show tell-tale signs of indiscriminate methylation, such as deformed leaves or reduced fertility. They then sequence the mutants’ genomes and compare them to a reference genome in order to find the genes responsible for the effects. One finding so far has been of a gene for an enzyme that removes methyl groups; when the gene is mutated, the enzyme doesn’t work, and the methyl groups stay on.

“Amazingly, many organisms, including plants and mammals, use very similar enzymes and chemical modifications of proteins for epigenetic regulation of gene activity,” says Prof. Saze. Thus, his work will shed light on epigenetic controls not only in arabidopsis, but in a host of other organisms as well. We’ll then be one step closer to understanding what controls the controllers.