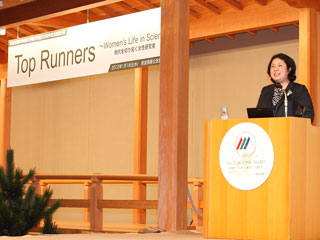 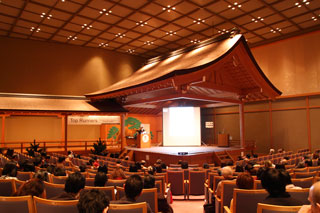 On January 18, 2012, OIST Vice President for Administrative Compliance Ms. Maki Kubo was invited to speak at an international symposium “Top Runners: Women’s Life in Science” at the Nara Institute of Science and Technology (NAIST). The symposium brought together renowned female scientists and professionals to discuss their research and life.

In her talk “Broadening Participation: Institutional Transformation, Leadership Programs and Networking”, Ms. Kubo, formerly the Vice-President and Director-General of the National Women’s Education Center (NWEC), talked about the ongoing effort by the Japanese government to enhance female presence in academia and business, such as goal-setting in the employment of female scientists and the launch of special projects aimed at generating university reforms. She also stressed the need for further scientific advancement through empowerment of female leaders and creation of global networking by these women.

At present, Japan ranks lowest among member nations of the Organisation for Economic Co-operation and Development (OECD) regarding the percentage of women in science at 13.6%. The objective of the symposium was to show support for female scientists and to bring about a perception change among young people aspiring to become scientists.

Ms. Kubo said “Regrettably, women are still underrepresented in Japanese universities while there is an increasing number of female Presidents at renowned universities in America. More than 95% of those who head national universities in Japan are males. However, we can bring a reform into Japanese academia.”

Other speakers of the symposium were Prof. Nicole Le Douarin, Director of C.N.R.S. Institute of Embryology in France, Prof. Susan Wessler of the University of California-Riverside, Dr. Beverly Purnell, Senior Editor of Science Magazine, Dr. Hiroko Kitamoto of the National Institute for Agro-Environmental Sciences in Japan, and Prof. Yoshiko Takahashi of NAIST.