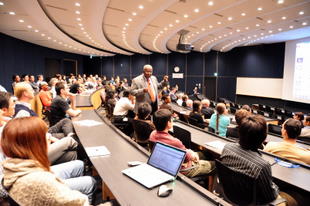 Prof. Jansen spoke to a packed audience of OIST researchers and staff. 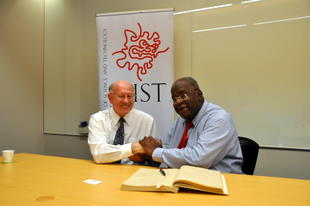 “The science studies we are now conducting with our students work hand in hand with the strong humanity courses so that our students also learn, in respect to the discipline, how to be human, decent, respectful and courageous,” said Professor Jonathan Jansen who engaged OIST staff on Thursday 16th February, 2012, in an inspiring talk; ‘The role of science in society in a developing country.’

Professor Jansen is South Africa’s University of the Free State Vice-Chancellor and President of the South African Institute of Race Relations. OIST was privileged to host the distinguished academic with wide experience in higher education. He visited OIST to discuss establishing collaborative research and student exchange programs.

Professor Jansen began with a short video introducing the University of the Free State (UFS). The university is playing a part in South Africa’s reconciliation process in particular amongst young South African scholars. The video also highlighted the university’s study abroad programs for scholars wanting to be trained in different parts of Africa, and overseas.

His talk focused on the theme of integration. In 2008, UFS was the center of a highly publicized racial-abuse scandal, which Professor Jansen said, almost tore the country apart. He instituted a university-wide program to eliminate further such incidents. “We invited the students involved, back to complete their degrees because you can imagine what would happen if we otherwise put them on the streets, what a danger they would become to society. We all have traumas and historical issues that require us to address…we need to learn to talk and listen to one another.”

“My greatest fear for South Africa is producing students who are technically proficient in the discipline but without a sense of moral or ethical obligation. It is insufficient to simply train students to be good at university if they do not also have a broader understanding of the world around them.”

In conclusion, Professor Jansen stated, “I am amazed by OIST and its massive potential. Our goal is to connect students and young faculty to serious academics happening globally. We want to promote global endeavors and citizenry.”