The Long Road to Publication 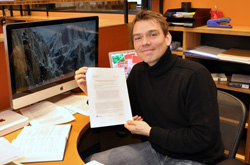 Gunnar Wilken with his new publication

Researchers often have to cope with long delays between when a research article is submitted and its publication, but Gunnar Wilken has more cause to complain than most: one of his papers recently came out 15 years after it was first submitted. For Dr. Wilken, now a researcher in OIST’s Structural Cellular Biology Unit, the winding path to publication involved four continents, the help of a legendary mathematician, and a very difficult proof.

The story began in 1996, when Wilken was studying for his Diploma (roughly the equivalent of a master’s degree) at the University of Münster in Germany. It was there that he heard a talk by Andreas Weiermann about a newly-devised strategy that promised to achieve a long-standing goal of proof theorists. That goal was to extend a well-known but little-understood technique called Howard’s Assignment, which had been devised by William Howard in the 1970s, to new applications. Intrigued, Wilken decided to take on the project for his Diploma research, but it turned out to be much more difficult than he or Prof. Weiermann had anticipated. Nevertheless, he solved the problem in about a year, earning a Diploma with honors in the process.

But when Wilken submitted his work to a journal, the draft came back with such negative reviewer comments that he gave up on the idea of publishing it. He moved on with his career, eventually joining the Mathematical Biology Unit at OIST in 2008. In the meantime, a review had come out that referred to his Diploma work, and this encouraged Dr. Wilken to present that work at a conference in Brazil in 2009. He then revised the original draft and submitted it to a new journal.

What happened next came as a big surprise. After waiting months for reviewer comments from the journal, Dr. Wilken received a long hand-written letter from William Howard himself. Though he was now in his 80s and semi-retired, the journal had asked him to review Wilken and Weiermann’s paper because none of the other reviewers fully understood the concepts involved. Rather than remaining anonymous, as is traditional for reviewers, Prof. Howard wanted to communicate with Dr. Wilken directly. His letter confirmed that Wilken and Weiermann had understood his technique correctly, and gave some suggestions for improving the manuscript. That first letter was followed by a second, and late in 2010, Dr. Wilken went to visit Prof. Howard in Chicago while in the United States for a conference. “It was very interesting to hear his stories, especially from his sabbatical spent with Gödel in Princeton,” Dr. Wilken says. (Kurt Gödel, who died in 1978, challenged the foundations of his field and is considered the most influential mathematical logician of the 20th century.) Dr. Wilken and Prof. Howard also talked about neuroscience and geometry, two of Prof. Howard’s interests.

After further revisions to make the article more accessible for the journal's readers, Wilken and Weiermann’s paper was finally published this month in the journal Logical Methods in Computer Science. He’s also had two publications come out recently related to work he did at Ohio State University before coming to OIST. Dr. Wilken switched research units last year, and now works on proofs for new mathematical formulas used in the Structural Cellular Biology Unit to filter out noise in images of molecules. Looking back, he says the long road to publication compelled him to develop strengths that are useful for any researcher: endurance, confidence, and effective communication.