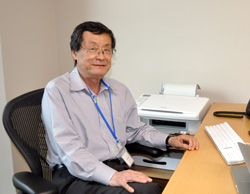 OIST was conceived not as an ivory tower, but as a catalyst for economic development in Okinawa. But translating scientific discoveries into commercial applications and economic growth requires quite a bit of legwork, as well as a particular mindset that may not come naturally to academics. That’s where Hirotaka Sugawara, OIST’s new Special Advisor to the President, comes in. A high-energy physicist who has worked as a researcher and administrator at numerous organizations in Japan, the United States, and Europe, Prof. Sugawara is here to help OIST fulfill its innovative mission.

“The role of universities has changed in advanced countries, especially the United States,” Prof. Sugawara says. Before the 1980s, he explains, research universities had two major roles: educating students and conducting basic research. During that decade, top US universities began to embrace a third role, innovation—that is, commercializing their discoveries through collaboration with industry. But, says Prof. Sugawara, “unfortunately, most of the universities in Japan do not have a clear view of this third role.” He would like to see OIST help change that by serving as an example to other Japanese universities.

Developing true collaborations with industry won’t be easy, Prof. Sugawara acknowledges, but will require persistence and a lack of fear of failure. He invites OIST members and those interested in collaborating with the university to drop by his office, A107, to chat frankly about their research and their needs.

Prof. Sugawara earned his bachelor’s, master’s, and Ph.D. at the University of Tokyo and went on to do research at a series of institutions in Japan and abroad. He spent nearly 30 years at the KEK Japanese National Laboratory for High Energy Physics, first as a professor and eventually as Director General. Most recently he served as the Director of the Washington, DC office of the Japanese Society for the Promotion of Science. In addition to fostering a culture of innovation at OIST, he will help President Dorfan to build strong relationships with the Japanese government and with other universities. He joined OIST on April 6 as both an administrator and a distinguished professor; his research projects span not only physics, but also brain imaging, population genetics, and climate change.