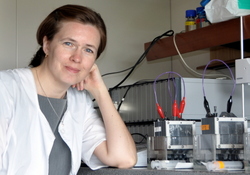 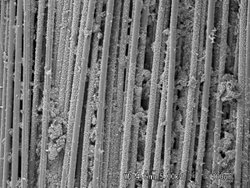 An image of some of the bacteria from inside a microbial fuel cell in the Biological Systems Unit.

What do you get when you mix Okinawa sea sludge, sewage, and some strategically-placed metal plates? Larisa Kiseleva, a researcher in the Biological Systems Unit, is hoping the answer is electricity and clean water.

The Biological Systems Unit is working on a microbial fuel cell in which bacteria break down waste, releasing electricity in the process. “In a normal fuel cell, you need a fuel that’s expensive, and a catalyst that’s even more expensive,” Dr. Kiseleva explains. A catalyst is what gets a chemical reaction going; in a fuel cell, that reaction generates an electrical current. In a microbial fuel cell, by contrast, catalysis is done by bacteria, and rather than requiring a conventional fuel, they can happily run on waste products.

Since the late 1990s, when intensive research began on microbial fuel cells, electricity output has increased considerably. It remains low, however, with a single cell producing just 0.3-0.5 V—not enough to power a light bulb. The Biological Systems Unit’s aim is to boost the fuel cells’ electricity-generating capacity, as well as the range of materials they can digest, by finding an optimal combination of bacteria to use in the cells.

They started their quest with a bucket of sea sludge taken from off the coast of Uruma in Okinawa, a source sure to have a rich variety of the type of oxygen-phobic bacteria needed for fuel cells. They then put small samples of the sludge into fuel cells and “looked at what survived after one or two months,” as well as testing each sample’s electricity output, Dr. Kiseleva explains. The next step will be to sort through those survivors, identify each type of bacteria, and see how much electricity each species can generate on its own. Then they will test different combinations of bacteria with various types of fuel, including waste with problematic components such as ammonia, nitrates, and heavy metals. “We want to see what these Okinawa bacteria can digest,” Dr. Kiseleva says. The answer will bring the unit a step closer to finding a way to both neutralize waste more effectively and harvest more electricity in the process.

The work was included in a presentation last month by Igor Goryanin, Head of the Biological Systems Unit, to 30 representatives of various Okinawa industries.