Creativity, an Indispensable Requisite in Physics 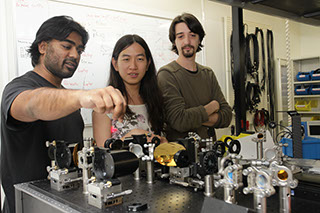 Professor Dani and his unit members 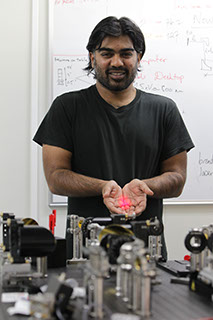 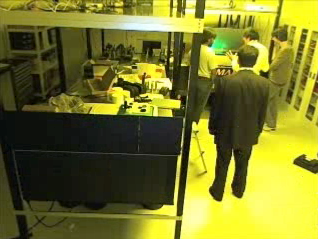 Watch a video of the construction of Professor Dani's laser lab

Research by Assistant Professor Keshav Dani, who leads the OIST Femtosecond Spectroscopy Unit, aims to understand the physics of what happens to electrons in materials at the femtosecond timescale, a millionth of a billionth of a second.

“As a physicist, you try to solve a physics problem through creativity. This is one of the reasons I chose to become a physicist, the love of seeking intellectual solutions through artistic creativity,” says Dani. His unit uses powerful lasers that emit very bright light, 1012 Watts, to measure electron motion in femtosecond timescales, 10-15 seconds, at the nanometer scale, 10-9 meters.

“I am interested in how electrons in materials ‘move or speak to each other’ at the femtosecond timescale. For example, if we want to increase the Internet speed, we need to understand the physics of existing materials at faster and faster speeds, or if necessary, develop new materials capable of responding at faster speeds,” says Dani.

Dani focuses on nanostructures made of metals, semiconductors and insulators that demonstrate unique optical properties. He also looks at materials such as graphene that exhibit electrons similar to those found in black holes.

These materials are ‘hit’ with a strong powerful source of light, a pump pulse, which has a peak power equivalent to the output of the world’s largest hydroelectric power station. The electrons in the materials which are naturally in a stable, passive state are excited into motion. Dani’s team then repeatedly ‘probes’ the material with a less powerful source of light, a ‘probe pulse’, that measure’s the properties of the material as it gradually moves back from this excited state to its original stable state.

Before coming to Okinawa, Dani worked at the Center for Integrated Nanotechnologies at the Los Alamos National Lab, New Mexico. He did his PhD at the University of California at Berkeley and his undergraduate degree at the California Institute of Technology. Over the years, he has worked in fields ranging from theoretical mathematics to quantum computing to ultrafast spectroscopy. At OIST, his research will build on his past experience combined with new ideas to study nanoscale carbon-based structures and new nanophotonic devices.