Professor Matthias Wolf and his team have set up a blood antibody test that can be used to determine who has previously contracted COVID-19. The test could be used to screen residents in Okinawa to determine the true extent of the spread of the coronavirus.

Scientists in the Molecular Cryo-Electron Microscopy Unit at the Okinawa Institute of Science and Technology Graduate University (OIST), together with members from the local medical community, have collected and analyzed samples taken from both the OIST community and the wider Okinawan community for the antibodies of SARS-CoV-2 in August 2020. The results were published in Scientific Reports.

Overall, the researchers found very low levels of these antibodies. In fact, for the OIST community they didn’t find any. These results are consistent with the overall situation in Japan last summer when it is thought that a very low fraction of people was exposed to the virus compared to overseas.

The researchers produced SARS-CoV-2 spike protein and used it for a two-step ELISA antibody test, which was validated with control samples supplied from hospitals around Okinawa. This testing strategy was previously approved for emergency use by the U.S. Food and Drug Administration.

One issue that came with testing the OIST community was that samples needed to be provided without medical professionals. So, the researchers created a fingerprick method that would allow individuals to draw their own blood. This resulted in one of their key findings; that a fingerprick method is equivalent to a medical professional taking venous blood when it comes to checking for antibodies. This is very useful as this method can be done quickly, easily and by the patients themselves, even at home.

This research also highlighted the longevity of the COVID-19 antibodies, which were still present eight and a half months after an infection had taken place, an encouraging sign as it suggests that vaccines will induce long-term protection.

Since the study has been completed, the researchers have tested an additional 4,500 samples and will continue to test samples provided by the medical community in Okinawa. A new study in collaboration with and led by Prof. Hiroki Ishikawa from OIST’s Immune Signaling Unit is currently ongoing and is testing vaccinated people for their antibody levels.

In April 2020 concerns were raised regarding the care of pets kept by people infected with COVID-19. It was thought that cats were highly susceptible to the virus, and that the virus might have another avenue of spreading, going from humans to animals and back to humans. This concern was highlighted internationally when tigers at Bronx Zoo tested positive for COVID-19, which they were believed to have caught from keepers.

“There were many unanswered questions about the new coronavirus, but we all assumed that it was likely an infectious disease of animal origin,” said representatives from the Okinawa Veterinary Medical Association. “In May, we found an article that stated that the risk of infection among veterinary professionals is relatively high compared to other professions. This might be because of the possible transmission pathway via cats and other pets, or because of the proximity to other staff and the difficulty of maintaining social distancing.”

“The original idea was to test the animals, but we realized that taking nasal swabs from cats wouldn’t be easy,” said OIST Provost, Dr. Mary Collins. “Veterinary professionals were potentially exposed workers. We sought to reassure them and check that they hadn’t been infected at particularly high rates.”

With the increased amount of research on COVID-19, veterinary professionals are no longer considered to be at exceptionally high risk.

In January 2021, COVID-19 began to spread periodically in Okinawa, mainly in Naha City. As such, the Okinawa Prefectural Government has declared its own state of emergency. The Naha Fire Department's ambulance team transported several hundred injured or ill people suspected of having COVID-19, with many later testing positive.

To get an idea of how many paramedics were subsequently infected by COVID-19, the OIST antibody test was administered to 65 firefighters and emergency service paramedics.

“They were front line workers and quite often provide ambulance services in Okinawa,” said Provost, Dr. Mary Collins. “It was a small survey to see if they were at an increased risk of exposure.”

In August 2020, all members of the OIST community were invited to submit a blood sample that was analyzed for COVID-19 antibodies. In total, 635 out of around 1200 people took part. The results found that none of these samples have the antibodies for COVID-19 and have been summarized in a manuscript submitted to the medRxiv pre-print server.

“This indicates, with a great level of certainty, that no one who submitted a sample had been infected with the virus,” said OIST provost and virologist, Dr Mary Collins. “My message is to keep up adherence to the COVID-19 guidelines on and off campus. “

Dr Collins emphasized that the antibody test established at OIST was very sensitive yet specific. It had reliably shown positive results when used on samples from Okinawa residents that were confirmed COVID-19 positive through PCR tests in April. It involved a two-step process, which meant that it was far more accurate than many other antibody tests conducted around the world.

“Testing volunteers has been a really useful exercise and has given us an idea of the challenges,” said Dr Collins. “The plan now is to test 6000 people in the Okinawa community over the next few months. This will give an indication of how many people in Okinawa have been infected.”

Dr. Hiroyuki Tahara, OIST’s Occupational Health and Safety Doctor, says that the results of this antibody test should not affect anyone’s behavior. “Keep adhering to the guidelines around the new normal – wear masks, wash your hands frequently, and social distance. This won’t change until a vaccine is widely available.”

Professor Matthias Wolf, from the Molecular Cryo-Electron Microscopy Unit, who supervised the project, added to this. “These results should tell everyone that we had no antibodies against this disease,” he said. “Having this knowledge is important because it emphasizes the need to follow health guidelines.”

A team of OIST scientists, led by Professor Matthias Wolf from the Molecular Cryo-Electron Microscopy Unit, have set up a blood test that can detect the presence or absence of specific antibodies against SARS-CoV-2, the coronavirus that causes COVID-19.

Unlike PCR tests that detect RNA from the virus in currently infected patients, the blood test is used to determine who has previously contracted COVID-19. The specific immune response against the disease can be detected for a longer time after the virus is gone, but it is not yet known if this results in lasting immunity.

The antibody test being used at OIST is an enzyme-linked immunosorbent assay (ELISA), which was originally developed and validated by the Krammer Lab at the Icahn School of Medicine at Mount Sinai, New York.

“The test works by using parts from the SARS-CoV-2 virus surface called spike proteins, which act as antigens,” said Prof. Wolf. “When an individual is infected with the novel coronavirus, the immune system reacts to these antigens and produces specific antibodies which can bind to them.

“In the test, we expose blood serum to bound antigens. The serum of infected individuals, containing these specific antibodies, then bind to the antigens. In a series of stages, we can detect the quantity of antibodies that bind and therefore determine whether an individual had COVID-19.”

Postdoctoral researcher, Dr. Melissa Matthews, is in charge of setting up the test. Currently, the team are awaiting positive control samples in order to validate the test.

Other units at OIST are now collaborating to further improve the antibody test. Dr. Saacnicteh Toledo-Patino, a postdoctoral researcher from the Protein Engineering and Evolution Unit, led by Professor Paola Laurino, is aiming to optimize the production of antigens, by using E. coli bacterial cells.

Meanwhile, Christian Butcher, a technician from the Fluid Mechanics Unit, led by Professor Pinaki Chakraborty, is working on automating the testing process to expand the daily testing capacity. Presently, the scientists are able to manually test around 1,000 samples each day.

“Ultimately, we hope that the test will be used to screen communities in Okinawa to fully understand the spread of COVID-19, helping officials make more informed decisions,” said Prof. Wolf.

A dialogue with the medical community on Okinawa has been established and the Prefectural Government has requested a pilot screen of 6,000 residents.

How much distance is enough?

Manufacturing Masks with a Cotton-Candy Machine

Modeling the Spread of COVID-19 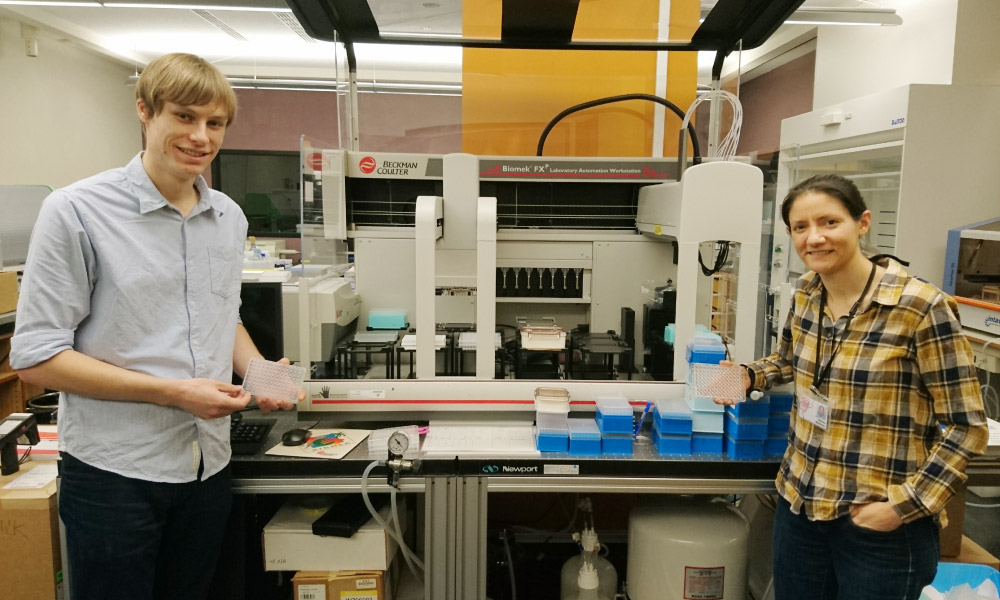