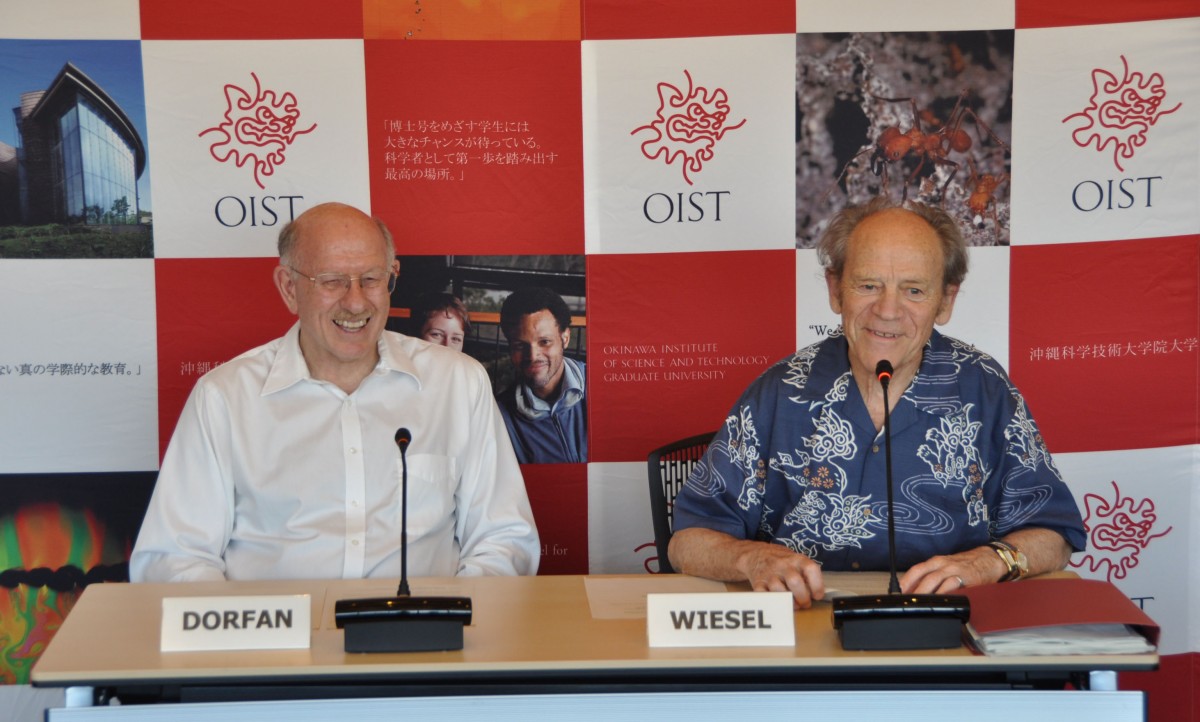 Okinawa, Japan, May 25 2012 — The Board of Governors of the Okinawa Institute of Science and Technology Graduate University (OIST) met on the OIST campus today.

The Graduate University opened officially in November 2011 and 46 world-class faculty in the life, physical and environmental sciences now work at OIST. Since that date there has been a vigorous campaign to recruit excellent students to the Doctoral Program. There were over 200 applications from which 80 candidates were asked to attend one of the Admissions Workshops that were held in January and March. Each workshop program included a series of interviews, briefing sessions, and other activities. These gave OIST faculty the opportunity to get to know the prospective students better, and the students the chance to see the excellent research facilities, environment, and teaching staff that OIST has to offer. A final selection has now been made and 34 students from 18 different nations and regions have accepted places on the Doctoral Program. The first academic year begins in September 2012.

Torsten Wiesel, Chair of the Board of Governors, commented, “The Board is very pleased that OIST has succeeded in attracting such outstanding students to Okinawa. These young people have the opportunity to choose from several world-class graduate schools and the fact they have decided on OIST demonstrates the attractiveness of the OIST program.”

The Board of Governors also congratulated the Dean’s Office on the vigorous international recruiting campaign for potential students.

“There is a tremendous feeling of excitement as we approach the opening of the Doctoral Program,” said Jeff Wickens, Dean of the Graduate school. “Our students are a diverse group. They have a very wide range of academic interests, come from a rich distribution of origins, yet they are all full of talent, originality and capability for independent research.”

OIST has recently strengthened its relationships with several institutions on Okinawa. On March 13, OIST and the Okinawan Prefectural Government entered into a collaboration agreement to enhance their joint effort to create innovative industries and to develop human resources that will catalyze future science and technology.

On March 22, 2012, President Jonathan Dorfan of OIST and President Teruo Iwamasa of the University of the Ryukyus signed an Agreement of Cooperation for the two universities. The universities plan to cooperate in several areas, including education and student affairs, science and technology research, and promoting innovation as well as collaboration between the government, the industry and the academia in Okinawa.

In order to benefit from each other’s strengths and to contribute jointly to ensuring safety in marine activities and developing socioeconomic activities in Okinawa, OIST President Jonathan Dorfan and Commander Hiroshi Majima of the 11th HQ signed a cooperation agreement on March 27, 2012 at the 11th HQ in Naha. The collaboration, to be carried out mainly by the OIST Marine Biophysics Unit led by Professor Satoshi Mitarai and the 11th HQ Hydrographic and Oceanographic Division, will be implemented in the following fields; improvement of the sophistication of ocean tide model and ocean current simulation; collection of sea bottom topographic data and ocean current data and improvement of drift prediction accuracy.

On May 22, OIST President Jonathan Dorfan and Okinawa National College of Technology (ONCT) President Shigeru Ito met at OIST to sign an agreement of cooperation between the two institutions. The agreement states that areas of cooperation will include exchange of students, researchers, and faculty for training; joint research projects; and use of research infrastructure. The agreement will be renewed automatically every five years

The Board of Governors commented on the good progress in the Campus construction. Laboratory 2 construction is now in the final stages and the building will be handed over to OIST on June 20. Laboratory 2 is linked to the Center Building by a spectacular skywalk allowing easy passage between the two buildings without disturbance to the delicate ecology in the valley below. The 500-seat auditorium is now in use and will be formally inaugurated on 25th of May. The auditorium gives OIST the infrastructure to hold major academic conferences on site. Student and faculty apartments, together with a shop and spaces for recreational activities, are grouped together in the Campus Village. Construction is in full swing and the facility will be open in time for the arrival of students in September.

The Board of Governors listened to a presentation on the second international workshop “Toward the Development of an R&D Cluster in Okinawa,” which was held at OIST on March 29-30. 40 academics, business leaders, and government representatives gathered at OIST to identify strategies for developing a research and development cluster in Okinawa. Promoting sustainable development in the prefecture by establishing such a cluster is a central part of OIST’s mission. The second workshop was organized in close collaboration with the Okinawan Prefectural Government. Several themes emerged repeatedly during the workshop, including the need to promote innovation and risk-taking, establish international and science-focused local schools, to both aid recruitment and educate the next generation of science and technology workers, attract world-class talent, build strong connections with the local community, foster relationships with local businesses and entrepreneurs, brand Okinawa as a hub for Asia, and capitalize on the prefecture’s unique assets.

The OIST Board of Councilors met concurrently with the Board of Governors. The two Boards had joint sessions leading to stronger interaction and mutual support between the two bodies. The scientific presentations given by OIST professors illustrating the strength of interdisciplinary research already underway at the university were particularly appreciated.

“I am very pleased with the progress at OIST.” stated President Jonathan Dorfan. “The key elements for success; physical infrastructure, experienced international management, world-class faculty and now ambitious doctoral students, are in place. We are eager to move forward to establish OIST as a global leader in education and research.”

The Okinawa Institute of Science and Technology Graduate University (OIST) is a new graduate school established in November 2011, which aims to conduct internationally outstanding education and research in science and technology, and thus contribute to the self-sustaining development of Okinawa and promote the advancement of science and technology in Japan and throughout the world. The OIST graduate education and research program is cross-disciplinary and aims to be at the leading edge of research in science and technology, including the life sciences, physical sciences, and mathematics. To lay the foundation for the Graduate University, 44 research units (with over 220 researchers) have been launched so far, with research in the five major areas of neuroscience; molecular, cell, and developmental biology; mathematical and computational sciences, environmental and ecological sciences, as well as physics and chemistry. The first graduate class will commence in September 2012.