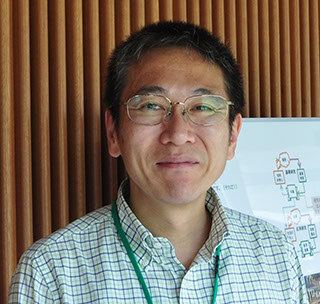 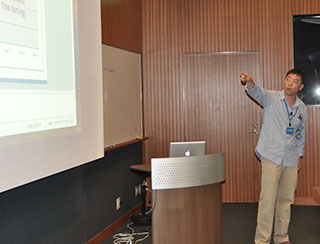 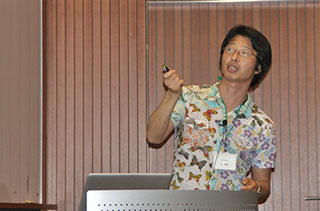 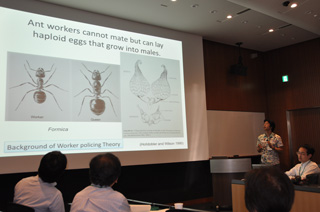 From March 5-7, a group of genomics researchers and evolutionary biologists met at OIST in pursuit of an ambitious goal: to develop a new theory of evolution. The researchers, who came from institutions across Japan, are part of a five-year project funded by the Japanese Ministry of Education, Culture, Sports, Science, and Technology to study changes in complex adaptive traits. These complex characteristics—for example, the development of new organs—are a long-standing puzzle in evolutionary theory, since they may require complementary mutations in several genes at the same time.

This was the second meeting of the project members, who plan to gather twice a year, said project head Mitsuyasu Hasebe of the National Institute for Basic Biology. Most of the meeting consisted of 15-minute talks followed by 5-minute discussion periods, he said. Since the participants included experimental biologists working with both plants and animals, as well as genomics and informatics researchers, it challenged the collaborators to think outside their specialties. Dr. Hasebe compared the experience to Charles Darwin’s excursion to the Galapagos Islands. “He gathered a lot of diverse things, and later he combined them to develop a new theory,” Dr. Hasebe explained. In the same way, he said, the goal of this project is to combine diverse information to propose a model for the evolution of complex traits.

Eiichi Shoguchi, a group leader in OIST’s Marine Genomics Unit, is a member of the project. “This meeting gave a good chance to directly introduce OIST facilities to 50 researchers from Japan’s mainland,” he said. “We thought that they were surprised at the high performance from the OIST sequencing section.”

The meeting included three seminars that were open to the OIST community. In the first, Feng Chen of the U.S. Department of Energy Joint Genome Institute talked about the advantages, disadvantages, and potential uses of the new single-molecule real-time (SMRT™) sequencing technology. The University of the Ryukus’s Kazuki Tsuji then presented his work on how ants sense colony size and adjust their reproductive behavior accordingly. Finally, Masahiro Kasahara of the University of Tokyo spoke about a new strategy for merging data from different sequencing technologies into a whole genome.