Genetic Mutation Isn’t So Random After All 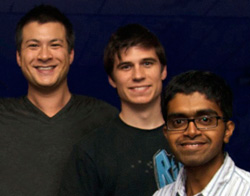 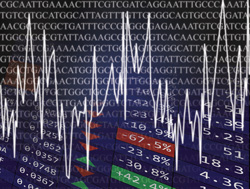 In the bacterium E. coli, different genes mutate at different rates, following a risk management strategy like those used in the stock market. This illustration by Iñigo Martincorena shows a segment of the E. coli genome sequence in the background with a plot of the variation in mutation rate and a stock-market table type representation of the data points used to make the plot.

A team led by Nicholas Luscombe, an adjunct assistant professor at OIST, has answered a key question about the mechanism of genetic mutation and evolution. His new study, which was performed at the European Molecular Biology Laboratory’s European Bioinformatics Institute, shows that living things are able to tightly guard their most valuable genes, while leaving others more vulnerable to chance mutations. Prof. Luscombe and his co-authors, Iñigo Martincorena and Aswin S. N. Seshasayee, report their results in an April 22 paper in Nature.

Evolution occurs in two stages, mutation and selection. Genetic mutations were long thought to occur randomly, sometimes leading to beneficial changes in an organism, but more often causing harm or no effect at all. Through selection, organisms with helpful mutations would be more likely to thrive and reproduce, passing on their genes to the next generation, while those with deleterious changes would eventually die off. In recent decades, though, some researchers have challenged the idea that living things would allow random mutation to play Russian roulette with their most critical genes; rather, they argued, there must be a way to ensure that some genes are more likely to mutate than others. Indeed, experiments have shown that genes necessary for survival evolve at a much slower rate than do their more expendable counterparts. However, the non-random mutation idea could not be convincingly tested because there was no way for scientists to examine the effects of mutation by itself—selection always got in the way.

Iñigo Martincorena, a Ph.D. student in Prof. Luscombe’s lab, was able to overcome this limitation by crunching a large trove of data, the sequenced genomes of 34 closely-related strains of the bacteria E. coli. By matching up and comparing the genes in the different sequences, he found that selection accounted for little of the difference in the rate of change among genes. And that difference is dramatic, with some genes mutating up to 60 times slower than others, says Martincorena.

“We were struck by how variable the mutation rate is along the genome,” he says. “What we have demonstrated is that these bacteria have evolved a clever mechanism to control the rate of evolution in crucial areas of the genome. This is important for many areas of health research. For example, similar mechanisms may occur in the development of cancers.” One of the strongest patterns the team found is that more frequently used bacterial genes are better-protected from mutation, Prof. Luscombe explains, a phenomenon that has also been observed in cancer cells.

“There must be a molecular mechanism that preferentially protects certain areas of the genome over others,” adds Prof. Luscombe. “If we can identify the proteins involved and uncover how this works, we will be much closer to understanding how disease-causing mutations arise in humans.”