Chaos Leads to Order … But How? 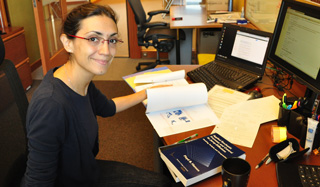 Dr. Marquez-Lago at her new office at OIST.

The Unit is interdisciplinary combining, stochastic modeling, multiscale methods, numerical analysis, and synthetic and systems biology. “Stochasticity or noise, in very short words means, unpredictable,” says Dr. Marquez-Lago.  “Well-structured, orderly systems such as gene expression, cell signaling or tissue movements arise from seemingly random interactions. The question we want to answer is how such ‘chaos’ leads to order.” She says.

Stochasticity in biology is due to the inherent unpredictability of molecular collisions and chemical interactions. These processes are random and one can never say with absolute certainty when they will occur. Certain behaviors are also random at the cellular level, but how order arises from this chaotic system is hard to understand even at simpler biological levels.

In her Unit’s wet lab, Dr. Marquez-Lago aims to create synthetic circuits that can be externally controlled. Together with mathematical models and simulations, they can provide a better understanding of the role of noise in biological systems and how key biological decisions are made. Many times, this implies consecutive iterations between the dry and wet labs, refining mathematical models with experimental findings and vice versa.

If this technique can be mastered, one could in principle tailor biological functions predicted by mathematical models, a key concept within the emerging field of personalized medicine. Controlling the levels at which proteins are produced and signals transmitted is one of the goals of synthetic and systems biology and relevant to pharmaceutical research.

Dr. Marquez-Lago’s research expertise is remarkable, and she has already been the recipient of several awards. In September 2011, she received news that the Mexican government had honored her with an accolade, distinguishing her as one of the best young researchers in her field.  She received the 2011 National System of Researchers (SNI) Level 1 award, from the Mexican National Council on Science and Technology (CONACyT). It is an honor to host such an accomplished interdisciplinary scientist at OIST. Welcome!