The early dawn’s activities of Saturday the 19th November 2011, signaled the beginning of a busy day at the OIST main campus in Onna village. 400 dignitaries from Okinawa, mainland Japan and overseas were expected to attend the Inauguration Ceremony to be held at the OIST central courtyard celebrating the creation of the new graduate university. 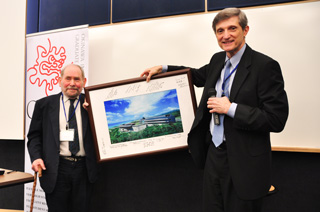 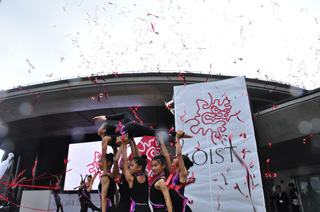 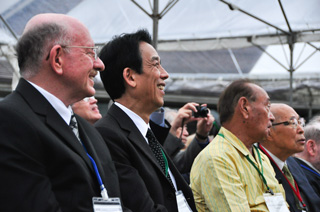 First on the programme was the Brenner Symposium celebrating Dr. Sydney Brenner’s contribution to the creation and development of OIST. The symposium began with greetings from Drs. Robert Baughman and Jerome Friedman, followed by Drs. Kenji Doya, Nori Satoh, Satoshi Mitarai and Alexander Mikheyev who spoke about their research illustrating the rich and varied future of OIST.  Professor Brenner concluded the symposium with an inspiring and enlightening speech on the history and vision of OIST. To conclude the symposium, Dr. Baughman presented Dr. Brenner with a framed photo of OIST buildings previously signed by all members of OIST Board of Governors.

The afternoon’s threatening grey skies meant that the second half of the programme, the inauguration celebration, changed venue temporarily to room B250 with projectors screening the ceremony in the courtyard and in two large conference rooms. The ceremony began with a welcome by OIST Graduate University President, Dr. Jonathan Dorfan, followed by speeches by OIST member of the Board of Governors, Dr. Akito Arima, Japanese Minister of State for Okinawa and Northern Territories Affairs, Mr. Tatsuo Kawabata, Governor of Okinawa Prefecture, Mr. Hirokazu Nakaima and a keynote speech by Massachusetts Institute of Technology (MIT) President Emeritus, Dr. Charles Vest. Dr. Vest concluded, “I congratulate President Dorfan and salute the forward thinking of the people of Okinawa and the Japanese government on their bold and visionary establishment of this new 21st century university. OIST has been born and will be nurtured in Okinawa. It will benefit Okinawa strongly as the years progress.”

Guests were then escorted from B250 out into the Centre court where a special celebration had been planned. VIPs seated, the media ready and rain on standby, the spotlight was now on the performers. The sounds and movements of the traditional Okinawan drums and dance were followed by two human-powered dancing lions and a dragon that paved the way for a group of young Hip Hop dancers who moved robotically around the stage against a backdrop of OIST’s Dr. Kenji Doya’s research robots. Finally elegant ballerinas from the local gymnastics club closed the evening with the red-ribbons gymnastic performance, a tribute to the OIST Logo.

A truly memorable day and an official beginning of the graduate university’s journey. OIST would like to thank everyone who joined us to celebrate this historic start of the Okinawa Institute of Science and Technology Graduate University.