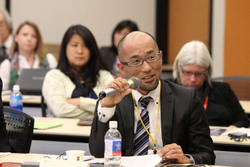 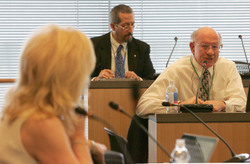 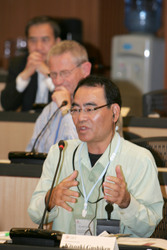 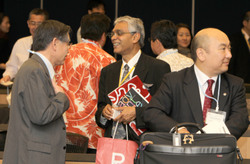 On March 29-30, 40 academics, business leaders, and government representatives gathered at OIST to identify strategies for developing a research and development cluster in Okinawa. Promoting sustainable development in the prefecture by establishing such a cluster is a central part of OIST’s mission. “I look forward with great anticipation to the recommendations that will emerge from this workshop, confident that the dream of economic growth from technology here in Okinawa is entirely realizable,” said OIST President Jonathan Dorfan as he opened the event.

For the bulk of the workshop, participants met in groups to discuss either “Strategies to Attract, Retain and Develop Human Capital,” “Financial and Business Infrastructure to Promote Entrepreneurship,” or “National and International Networking and Physical Infrastructure Planning.” On the afternoon of the second day a steering group met to compile each group’s recommendations into an action plan.

Several themes emerged repeatedly during the workshop, including the need to promote innovation and risk-taking, establish international and science-focused local schools (to both aid recruitment and educate the next generation of science and technology workers), attract world-class talent, build strong connections with the local community, foster relationships with local businesses and entrepreneurs, brand Okinawa as a hub for Asia, and capitalize on the prefecture’s unique assets.

David Secher, a workshop participant who is a founder of the technology transfer training organization PraxisUnico, said the fact that so many people had traveled to OIST to contribute their time to the workshop was an encouraging sign for the cluster. OIST’s long-term success is likely tied to that of the cluster, he said, explaining, “OIST needs the support of its local community and local government. One of the ways it can achieve that is by acting as a catalyst for development.”

The workshop participants’ recommendations will be released early in April, followed later by a full report on the workshop proceedings.