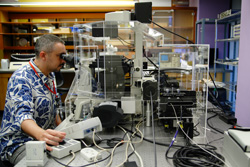 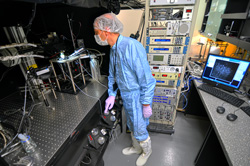 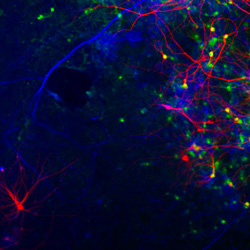 No one can predict what experiments will produce the next scientific breakthrough, but history has taught us that new technologies are crucial. “Cutting-edge instrumentation is often the key for transforming inspirational curiosity into demonstrable innovation,” says Jonathan Dorfan, president of Okinawa Institute of Science and Technology Graduate University (OIST).

That idea drove Dorfan - together with OIST’s Provost Robert Baughman - in expanding the infrastructure for imaging at OIST when he took over from founding president, Sydney Brenner, upon the transition to a graduate university in November 2011. Noting that scientific discoveries increasingly involve physical and biological systems functioning at the nano or atomic scale, in short order, they assembled an array of cutting-edge imaging devices and a crew of scientists who can creatively manipulate them. “The resolution of microscopes, using either light or electrons, has rapidly improved with the introduction of new, fast, wide- dynamic-range solid-state detectors and new analytical algorithms,” explains Baughman. “This has expanded the ability to understand key processes, from both a structural and a dynamic perspective.”

The strategy is already yielding rich research results, especially in neuroscience. Jeff Wickens, head of the OIST Neurobiology Research Unit, for example, uses two-photon microscopy to observe directly changes in synaptic efficacy associated with the brain’s ability to use dopamine to control movement. Progress in this area could illuminate the pathology of Parkinson’s disease and offer leads in the search for a treatment. Gordon Arbuthnott, who leads the OIST Brain Mechanisms for Behavior Unit, uses two-photon microscopy on neurons from striatum in culture to image changes in synaptic signaling associated with activity of the large cortical input to these cells. Difficult to study in vivo, these studies could open discovery pathways for drugs for Parkinson’s disease, Alzheimer’s disease and other CNS disorders. And in zebrafish, confocal images produced by Ichiro Masai, the head of the OIST Developmental Neurobiology Unit, have unveiled the developmental and neurodegenerative processes that determine cellular differentiation in the eye. The studies offer fresh clues to biomedical researchers struggling to understand debilitating hereditary diseases in the human eye.

These and other achievements at OIST have been made possible by a rich field of imaging instruments that few institutions anywhere could match: a 300 kiloelectron volt (keV) cryotomography transmission electron microscope (TEM), a 100 keV TEM, two scanning electron microscopes, several confocal microscopes, four two–photon microscopes, a rotating anode x-ray source, and five fluorescence/chemiluminescence image analyzers. An atomic force microscope and two scanning tunneling microscopes are on order. Previously OIST constructed a unique 300keV Lorentz electron microscope (EM) that permits control of electromagnetic fields and temperature outside of the EM focusing lenses, which is a major advance in imaging that has led to new understanding of magnetic nano-domains in high temperature superconductors.

This investment has impressed its new faculty recruits, as well as their students and postdocs. Bernd Kuhn, an assistant professor at the university, who says he “never had to make any compromises regarding the specifications of equipment at OIST,” will start his optical neuroimaging unit at OIST this summer. He had been concerned that, as a young group leader, he might not be able to draw top talent. But the generous facilities made it easy to lure several experts in imaging and nanotechnology. “The word spread quickly that we have amazing equipment,” he says. “Researchers at other institutions might put the blame on equipment if a project does not work out. That will not be possible for us.”

Success has come not just from having good devices but using them in original ways. “Much of the imaging-related science at OIST involves the creative use of commercially available instruments,” says Baughman, who has led the implementation of shared resources at OIST. “The creativity arises from the manner in which the instrument is combined with other analytic methods and hardware, often in interdisciplinary collaboration with other units, to develop new or extended observational strategies.”

Kuhn, for example, combines rich experience using two-photon microscopy with the “genetically encoded indicators” that control gene expression. “I collaborate with labs in and outside of Japan to get the latest indicators, already inserted into viral vectors whenever possible, for convenient gene transfer,” says Kuhn.

Ulf Skoglund, leader of the OIST Structural Cellular Biology Unit, is likewise transforming his technology of choice, molecular electron tomography. Skoglund studies the ryanodine receptor complex, a group of proteins that help to regulate calcium flow in and out of the sarcoplasmic reticulum of cells, thereby playing a crucial role in controlling muscle action and signal transduction in the brain. The function of each of these, which would give significant advantage to drug discovery efforts, cannot be inferred from looking at the entire complex. The aggregate view does not allow measurement of how a drug works and whether predictions about its mechanism are correct. While most research aimed at breaking down the ryanodine receptor complex has focused on getting a high-resolution image of the crystallized proteins, Skoglund aims to complement these studies with critical functional dynamic information gained by imaging the proteins in their native tissue. To this end, his group has taken advantage of recent advances in direct electron detectors and revamped the software so that it could refine the protein structures and remove noise artefacts encountered when working with thick tissue. “Our molecular electron tomography procedure is unmatched for resolving native individual proteins in solution or in tissue,” he says.

Tsumoru Shintake, the leader of the OIST Quantum Wave Microscopy Unit and the architect of Japan’s x-ray free-electron laser, is also pushing imaging technology to new extremes. With low-voltage electron beams, his group aims to analyze large and unwieldy membrane proteins in situ in sub-micron crystals. “At the moment no one has achieved crystallographic analysis on such small crystals,” says Shintake. The key is low energy that allows higher contrast images without burning the thin samples, explains Shintake, who is also pursuing powerful numerical software to eliminate noise associated with in-elastic collisions. If things go according to plan, he will soon be able to image membrane proteins with a bench top device that has the capacity of a few kilometer x-ray laser. He says, with understatement, “analysis of membrane protein structures would have a large impact in the drug design field.”

Meanwhile, Dorfan plans to keep building imaging capabilities at OIST. A tender has been released for an accelerator facility that will produce very intense KeV-range x-rays and allow on-site x-ray crystallographic studies of proteins, tomographic reconstruction of small animals and bio-samples, and x-ray scattering and absorption experiments for the study of materials.

When all laboratories are in full operation, Dorfan expects synergies from complementary investigations — “imaging the same system, or sub-systems using different techniques.” A nano-fabrication facility now under construction will give new meaning to the concept of interdisciplinary study. Keshav Dani of the OIST Femtosecond Spectroscopy Unit will use the facility to push the limits of nano-system observation using extremely intense, very short “femtosecond” laser pulses to measure electron distributions. Mukhles Ibrahim Sowwan of the Nanoparticles by Design for Nanotechnology and Biomedical Applications Unit will likewise take advantage of the new facility to develop new materials with specific magnetic,optical and thermal properties for Nanoparticles Enhanced Hyperthermia.

“The OIST is investing in a wide range of cutting-edge imaging devices and is ensuring that those devices are freely accessible to all the researchers there,” says Dorfan.