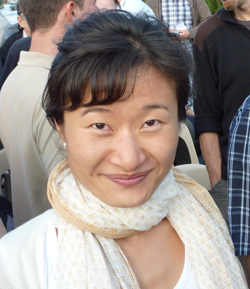 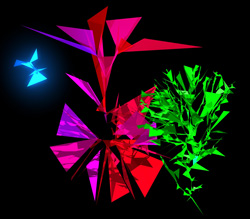 The geometry of a sample of brain cells (red/pink) and coral (green) structures alongside a mathematical model (blue) designed to reduce branch costs. Many of the branches in all of the structures turn out to be flat. Branches are the points where two or more triangles meet.

When Robert Sinclair looks at a leafless tree, he sees more than a reminder that spring has not yet arrived. For him, the tree is a chance to observe a fundamental principle of nature: that branch points in a biological system tend to be flat. In a recent paper in PLoS Computational Biology, Prof. Sinclair and his co-authors show that this principle holds true for diverse biological systems, and explain it mathematically.

The project started when then-postdoc Yihwa Kim of the Computational Neuroscience Unit asked Prof. Sinclair, who heads the Mathematical Biology Unit, whether it would be possible to show mathematically that branchings that stay in a single plane cost less—in terms of resources required for construction, operation, or maintenance—than do those that are more three-dimensional. It was a deceptively simple question, but one that took Dr. Kim, Prof. Sinclair, Computational Neuroscience Unit head Erik De Schutter, and their co-authors several years to solve. The key turned out to be stripping the problem down by removing some starting assumptions, such as that all branches are of equal thickness, that aren’t true in nature. In addition, they didn’t try to predict the angles of the branch point, but only its flatness. “You have to forget about finding the full answer,” Prof. Sinclair explains. The calculation eventually confirmed that keeping branch points flat should allow living things to use the smallest possible quantity of material to spread out over a given area.

But would this mathematical principle hold true in nature? To find out, the researchers analyzed the structures of two very different systems, coral and neurons. They found that 57% to 88% of the branch points in both systems were indeed flat—that is, between 160-180°—a proportion much higher than could be accounted for by chance.

Since it defines what normal neuron branching looks like, the research could potentially be applied to identifying abnormal development, Prof. Sinclair says. But for him, the next step is to test whether the flat branching pattern holds true in other biological structures, such as cobwebs. “We have identified and explained a hidden order in apparent chaos,” he says.