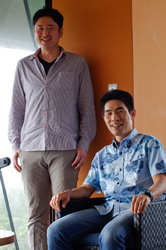 Prof. Saze studied photosynthesis as an undergraduate at Kyoto University, then went on to do his Ph.D. work in plant epigenetics at the University of Basel and the Friedrich Miescher Institut in Switzerland. He continued his research as a postdoc at Japan’s National Institute of Genetics before joining OIST last year as the head of the Plant Epigenetics Unit.

Prof. Doya and his collaborators, Shigeto Yamawaki and Yasumasa Okamoto of Hiroshima University School of Medicine, are being recognized for their decade-long investigation of the neurochemical serotonin’s roles in the brain. They have shown that serotonin enhances long-term prediction of outcomes—that is, patience—in animals and humans. They are now developing algorithms to diagnose and plan therapy for depression patients using genetic, brain imaging, and other biological data.

Prof. Doya earned his Ph.D. in engineering at the University of Tokyo, and went on to research positions at the University of California, San Diego; the Salk Institute; Advanced Telecommunications Research International (ATR); and the Japan Science and Technology Agency. He joined the Initial Research Project of OIST in 2004 as the head of the Neural Computation Unit and now also serves as the Vice Provost for Research.