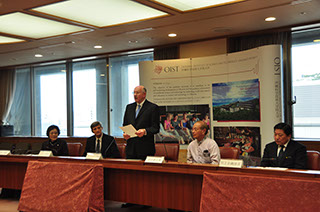 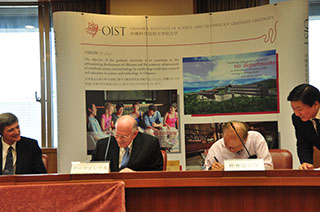 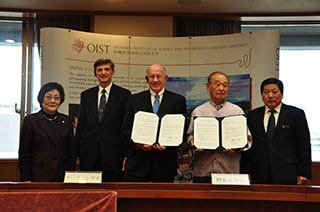 OIST’s objective is to conduct world-class education and research in science and technology, thus contributing to the self-sustaining development of Okinawa and to the global advancement of science and technology. In order to achieve this goal, OIST has collaborated closely with the Okinawa Prefectural Government (OPG) on a wide range of areas that include the establishment of an international R&D cluster on the island.

On March 13, the two parties entered into a collaboration agreement to enhance their joint effort to create innovative industries and to develop human resources that will catalyze future science and technology. To this end, further exchange among local municipalities, universities, research institutions and industries on the island is called for. OIST President Jonathan Dorfan and Governor Hirokazu Nakaima signed the agreement in a cordial ceremony that took place at the OPG office, which was also attended by OIST Provost Robert Baughman and Board member Hiroko Sho, and Director General Yoshihisa Kawakami of the OPG Department of Planning. “Creating an R&D Cluster in Okinawa requires the close cooperation between OIST, the Prefectural Government, and the private sector. This agreement commits OIST and OPG to a long-lasting partnership in support of Okinawa,” said President Dorfan, while also referring to the OIST’s great potential in the development of new drugs, treatment of disease, new materials for solar power, and information technology. Pledging the continued OPG support for OIST, Governor Nakaima expressed his hope that the research at OIST will result in the creation of new business and innovative industries, which capitalize on Okinawa’s marine and natural resources.

The agreement comes on the year Okinawa is celebrating the 40th anniversary of its reversion to Japan. Referring to Okinawa’s cultural richness, Governor Nakaima said the existence of OIST is itself a stimulus to the prefecture’s youth, who he said have taken pride in art, music, and folk entertainment, but not necessarily in science. “OIST will have a great impact on the island’s young minds,” the governor said. President Dorfan concurred with his view, and cited OIST community relations activities including the OIST visit program targeting local schoolchildren and the Open Campus 2012 on March 18.

As the first step of collaborative efforts based on the agreement, OIST will organize an international workshop focusing on the development of an R&D cluster in Okinawa on March 29-30 with significant support by the Prefectural Government.