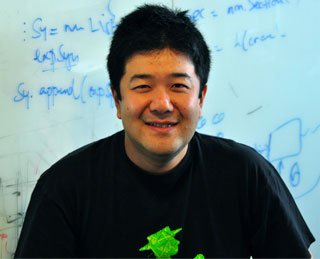 Brain neurons communicate with each other by firing nerve impulses from an upstream neuron to the next downstream neuron. These spikes normally occur in an irregular series, a spike train, of several tens to hundreds of spikes at frequencies between several to a hundred spikes a second. A central, controversial, and long-standing question in neuroscience is how neurons encode the information they are sending along: is it the rate of spike firing that carries the message, or is the timing of the output spikes from a neuron relative to the input to that neuron more important? Another side to this question then arises: given some particular output of that neuron, how can one infer what the input to a neuron must have been? In a paper published in The Journal of Neuroscience in January, OIST researchers Sunghou Hong and Erik De Schutter have made a new contribution to this study.

Firing rate is a simple measurement but is difficult to estimate quickly as neurons fire relatively slowly. Therefore, the brain could use this information only if it considers the instantaneous firing rate of a population of hundreds of neurons. However, once you begin to consider the activity of a population of neurons it is natural to wonder also about relative spike timing -- in particular, do some of the neurons fire synchronously or not?

In practice, synchronous firing of two neurons can be detected by calculating the amount of correlation between two spike trains. Neuroscientists have indeed observed many instances of synchronous firing, but can the brain actually use this information? In 2007 de la Rocha et al. published an article in Nature claiming that spike time correlation should always increase with the firing rates of the neurons.  As input firing frequency rises, the chance that any output spike occurs at the same time as an input spike, the degree of correlation, also rises. This creates a big problem if spike time correlation does carry any information, as increased frequency of an output spike train would inevitably distort whatever information may have been originally contained in the spike train correlation. Indeed, in their words, firing rate-coding and correlation-based coding are mechanistically intertwined with each other and therefore little is gained by measuring spike correlation if the firing rate is already known, suggesting that neurons use only firing rate to encode information.

OIST researchers Sungho Hong and Erik De Schutter have now shown that while true this statement is not general: it applies only to one class of neurons, dubbed ‘integrators’, which operate more or less by rate coding, but not to another type described as ‘coincidence detectors’, which are better at correlation coding, based on simultaneous firing of two input neurons. Coincidence detectors show a consistent relationship between input and output correlation, independent of the firing rate. “This is exciting research,” said Sungho Hong. “There is still a lot to understand on what correlation does and how much information it carries.”  First, the OIST team used computer modeling of neural activity and an extension of the mathematical framework used by de la Rocha et al. to explain these differences. Then, in collaboration with Stéphanie Ratté and Steven Prescott of the University of Pittsburgh, they demonstrated that real neurons in a rat slice preparation can be made to operate in either the integrator or coincidence detector mode, depending on how they are stimulated. In other words, neurons in the brain probably use both firing rate coding, when the role of an individual neuron dominates in a population and how fast it fires is most important, and correlation coding where the information is encoded in how closely two neurons fire together, with a varying importance of one over the other depending on the type of neuron it is and the type of input it is receiving.