The mention of quantum computers can seem like something from the realm of science fiction. However, according to research being conducted by Dr. Denis Konstantinov, OIST’s Associate Professor at the Quantum Dynamics Unit, this seemingly fictional idea can become reality. 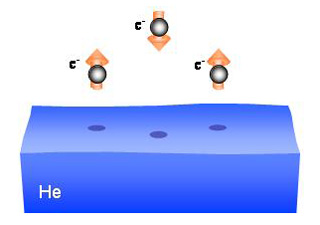 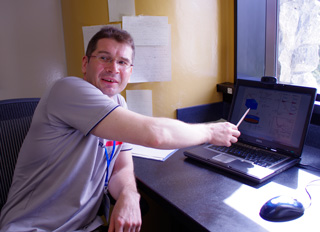 Above: Electrons on Helium. Below: Dr. Konstantinov explains how free electrons can lead to Quantum computing.

Quantum refers to the microscopic world where ‘common sense’ laws of classical physics cease to be applicable. “In the macroscopic world, we can always predict the outcome of our measurement with certainty. In the quantum world, no matter how much we know about the object prior to the measurement, sometimes we can predict the result only with a certain probability,” explains Dr. Konstantinov.

Quantum computers are computational devices that use this probabilistic nature of quantum measurement to encode information and perform computational analysis. However, an ideal quantum computer must be isolated as much as possible from the environment to reduce the loss of quantum information through what is called quantum decoherence. One way to overcome this problem is to find a system, which is extremely well isolated from the environment. However, such a system is likely to be very immobile and hard to manipulate, making quantum computers difficult to operate.

Conversely, research on electrons floating on the surface of liquid helium show that electrons suffer from very little decoherence. In addition to moving almost freely in a vacuum along the liquid surface, they are extremely mobile and are easy to control by external electrical voltage. Being quantum particles in nature, electrons are ideal for the practical implementation of various aspects of quantum mechanics, particularly quantum information processing. Dr. Konstantinov’s goal is to bring these possibilities into reality.

Before coming to OIST, Dr. Konstantinov previously worked at the Low Temperature Physics Laboratory at RIKEN where he studied the quantum properties of electrons on helium. Helium liquid has remarkable properties for example; it is the only known quantum liquid existing in nature that does not freeze at absolute zero. As a result, the system has no impurities and enables electrons to develop the highest mobility known in nature. The ease of locating and describing electrons on helium, as well as extremely weak decoherence, can be harnessed in quantum information processing.

At OIST Dr. Konstantinov studies the behavior of complex quantum systems including electrons. His group aims to reveal and describe the systems’ unique proprieties and show how electrons on helium complement the electron gas that exists in semiconductor heterostructures.

The research is carried out in high magnetic fields and ultra-low temperatures where the dynamic effects of the particles are more prominent and control parameters can be well defined. He explains that, “by understanding the nature of complimentary systems like interacting electrons on helium and electron gas in heterostructures, we can describe and make changes to particles through quantum mechanics and consequentially find various applications that they could be used in such as quantum information processing.”