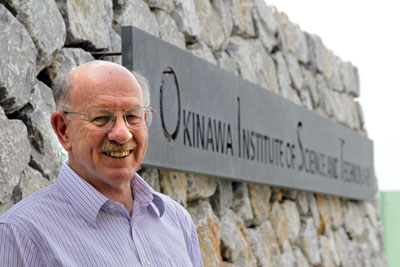 This was a year of change at OIST; change that took place rapidly in an atmosphere of excitement and anticipation at the Graduate University.

The most important change came in October 2011 when the Japanese government granted accreditation to OIST. This signaled the move in November 2011 from the OIST Promotion Corporation to the OIST School Corporation and the official opening of the OIST Graduate University. I offer my most sincere thanks to all those who worked so hard and effectively since the initial concept of establishing a graduate university on Okinawa was announced in 2001 to its realization in 2011.

We have now entered into a new phase for our university as we move towards the opening of the doctoral program in September 2012. The arrival of the first class of students will complete the suite of key milestones that allow us to truly function as an academic institution.

The milestone of establishing a multi-skilled and strongly committed staff has been achieved. We can be very proud of the talent that has been assembled here in Okinawa.

To build a world-leading research university requires hiring world-class faculty. By 2010, about 25 outstanding PIs, mostly in the life sciences, had already been attracted to OIST. A recruitment campaign was mounted in 2011 to increase the faculty, but also to add faculty from the physical sciences. The Faculty, currently 46 strong, is now well balanced between the life and physical sciences. Our professors are committed to the goal of creating a multidisciplinary research environment and already collaborations are forming between units from very different scientific disciplines.

We are extremely advantaged at OIST by the quality of our physical infrastructure, which has been specifically designed to achieve collaboration and interchange among our researchers and students. The campus has expanded significantly during this fiscal year. The 500-seat OIST auditorium is now finished and in use. Laboratory 2 will be handed over to us on June 20, 2012, which will effectively double the research space at OIST. I anticipate that the new research units will be well established in the new building by the start of the academic year in September 2012. The construction of the campus village, which includes researcher  and student apartments, a convenience store and a gym, is now well advanced, as is construction of 22 houses for those faculty who would like to live on campus.

The final piece in this jigsaw is of course the students themselves. We started the recruitment process late in the season due to the fact that we only became an accredited university in October 2011; however following a very energetic recruitment drive, we have had 208 applications for places on the doctoral program. We are now undertaking a vigorous and careful selection program that includes bringing the best candidates to Okinawa for 3-day admission workshops. We are delighted by the quality of the applicants who display a wide range of academic interests and international diversity and I am confident we will have an outstanding group of students for our first academic year.

OIST’s progress was highlighted during the meetings of the Establishing board, the Board of Governors and the Board of Councilors held during fiscal year 2011. I would like to thank all the members of these Boards who represent a unique brains trust of experience and wisdom, giving us invaluable advice and guidance.

Above all I would like to thank the government of Japan for their bold vision in creating a new model of science and technology research and education on Okinawa and for their constant support. OIST has the staff, the faculty, the infrastructure, and soon the students, and is now equipped to run a world-class graduate university. We can all look forward to an exciting future.