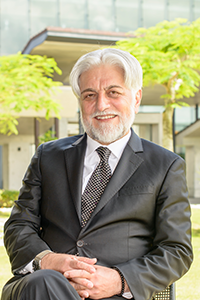 Ali Ganjehlou, an architect with more than 30 years of international experience in Japan, North America, Asia and the Middle East, joined Okinawa Institute of Science and Technology as the Vice President of Building and Facility Management Division in August 2015. Prior to joining OIST, he provided services for the leading consulting firm of Japan, Nikken Sekkei since 1989. He was responsible for general management of New York office of Nikken Sekkei in the past, and was the general manager of Riyadh office of Nikken Sekkei since 2010 until leaving his position to join OIST.